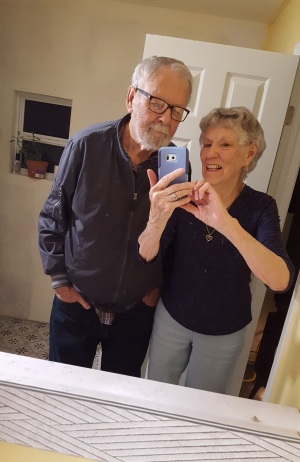 Gene passed away on Tuesday August 31, 2021 at his home in Camino CA. Some of his family were there to ease him on his way.  He was born Elbert Eugene Coughran.  November 5,1933 in Checotah Oklahoma, a dust bowl baby.  He graduated from Bakersfield High and worked with his father on the ranch where he was raised.  He was baptised at Arvin Assembly of God church and married Neva Louise there on May 9, 1951.  Gene and Neva moved to Santa Clara in 1960 where he joked that he was a shipoligest in charge of packology.  He became the owner of M-H Industrial Woodworks in San Jose where he was the design engineer for specialized shipping crates for electronic equipment.  He played on a softball team and was a member of the  Elk Lodge.  Later he and Neva moved to Brentwood in 1993 and became very involved in the Antioch Senior Center. They were escorts for the  "Fun after 50 Trips".  Besides trips all over the US, they traveled to Canada, Columbia, Germany New Zealand, Australia, Panama Canal and more.  They moved to Montana's Bitterroot Valley in 2006.  He enjoyed the Victor and Stevensville Seniors Centers.  He enjoyed doing woodworking, gardening and farmers markets.

To send sympathy gifts to the family or plant a tree in memory of ELBERT EUGENE COUGHRAN, please visit our tribute store.