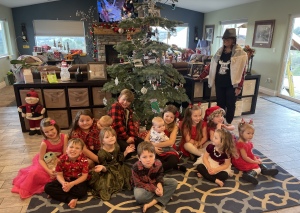 Our mother was a fighter.  She fought hard to be here as long as she could.  She beat the odds when the odds were stacked high against her time and time again.  I can’t even count how many times we were told she wasn’t going to make it through but she did mostly just to prove them wrong I suppose.  She had a huge heart and was very giving.  Her grand babies meant the most to her in this world.  She loved to shop for all of them and had to have a toy or treat to give them every single time she saw them.  Despite all her kids telling her to stop spoiling them.  She didn’t listen to ANYONE.  If she did something it was because she wanted and not because she was told to.  She broke all the rules, not because she was bad, but because she didn’t want to be told what to do.

She moved up to El dorado county in high school where she helped her parents clear their 17 acre property “the hill.”  She was in the rodeo for a time.  She shared many fond memories of those days.  She loved riding horses.   She was a tough cookie. She had her kids in 4H & FFA. Holly was a caregiver most of her life.  Her clients were like family to her.  A single mother of five.  How she raised us as a single mom and we all survived and turned out pretty successful, I haven’t a clue!!! But she did!  Someone must of told her she couldn’t so she proved them wrong. Her parents helped us tremendously.  Her father was a huge influence to raise us kids until his passing in 95.  The thing about mom that I loved the most was you didn’t have to wonder what she was thinking she would just blurt it out unfiltered and often times absolutely ridiculous or embarrassing.  She had some of the funniest and inappropriate sayings that she would say.  Mom was unlike anyone I have ever known.  She was strong minded, opinionated and genuine.  She used to always say she watched soap operas to make her feel better about the crazy life she’s had!  I think we were her soap opera.  I remember the first time she was in a car with Trevor who’s now my husband, we were barely even dating a month and she played him the Train song “Marry me” and she told him he’s going to marry me.  I was soo beyond embarrassed and super mad at her.   Again the lady had NO FILTER! She never apologized just said you’ll see your going to marry him! You see that’s the thing mom was unapologetically who she was!  She lived to her own standards and followed her own rules. So like she said you can cry about me for a little bit but that’s it move on your all going to be just fine!!!

To send sympathy gifts to the family or plant a tree in memory of Holly Sharon Patterson, please visit our tribute store.