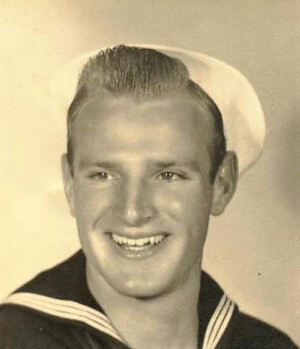 On Friday, December 25, 2020, Stanley Leslie Bosch, loving husband and father passed away at the age of 93 due to complications from Leukemia.
Stanley was born Leslie Stanley Douglas, Jr. on March 12, 1927 in Sunnyvale, California to Selma May Wise. In that same year his mother married John Peter Bosch, Jr. and later, Stanley would change his name to Stanley Leslie Bosch to honor the only man that he ever knew as Father.
In 1942, while attending El Dorado High School, he was selected to receive special Forest Guard Training due to the WWII forest ranger shortage. This training would take place at Mount Shasta High School where he graduated in 1943 at the age of 16. That summer and fall he worked as a Forest Guard at Silver Lake, CA. On April 3, 1944 he voluntarily joined the US Navy, with the approval of his father. After basic training, he was assigned as a target trainer for fighter pilots at La Jolla, CA. On
April 19, 1945 he was assigned to the destroyer, USS Charrette, as a gunner’s mate third class. When the war ended Stanley continued in his assignment until he was discharged mid-1946 and returned home to Smith Flat, CA.
While there his sister, Florence, introduced him to her friend, Marjorie Cranford, a senior at El Dorado High School. As Stanley got to know Marjorie they fell in love and were married December 7, 1946, in Placerville, CA. (Remarking on this choice of date Stan would laugh and say, “I started my own war!”) Their marriage would endure for 71 years until Marge’s death in 2018.
In 2019 Stanley found his second love, Joan Grace Jelinek Davidson-Scheer. They were married on July 6, 2019, in Sacramento, CA and enjoyed each other’s company until his death.
Stanley worked at Aerojet General Corporation in Rancho Cordova, CA. After 31 years he retired as a Senior Special Tools Buyer.
Stanley was very involved in his community. As a faithful member of The Church of Jesus Christ of Latter-Day Saints he served in several capacities including: Executive Secretary for five bishops, President of the Young Men, Elder’s Quorum Presidency and Ward Mission Leader. In 1973-74 he served as the Chairman of the Band Wagon, a non-profit, whose mission was to send the El Dorado High School Stage Band on a European tour. Under his direction over $20,000 dollars were raised and the band and chaperones were able to make the trip with no personal out-of-pocket expenses. In the late 1990’s Stanley served for two years on the El Dorado County Grand Jury, making recommendations on several high-profile cases.
He was known for his quick wit, his infectious smile, and his kind and compassionate spirit. He also loved music, dancing, traveling, sportfishing and family gatherings. Stanley had a passion for family; for him it was always family first. Stanley is preceded in death by his father, John Peter Bosch, Jr., his mother, Selma May Wise Chapman, his first wife, Marjorie Cranford Bosch, his son John Leslie Bosch and his grandson, Russell Allan Bosch.
He is survived by his sister Florence Loraine Thomas, his wife Joan Davidson-Scheer, his son, Allan Dale Bosch, stepdaughters Jackie Charlene Davidson Young and Deborah Diane Davidson McKenna as well as many grand, great-grand and great-great-grandchildren.
Due to the COVID19 restrictions there will be no immediate funeral. A private grave dedication to honor his life will be scheduled for a future time.

To send sympathy gifts to the family or plant a tree in memory of STANLEY LESLIE BOSCH, please visit our tribute store.