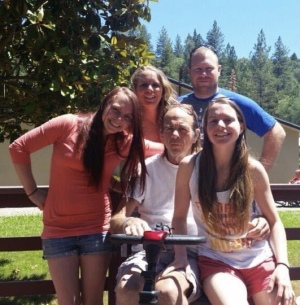 Thomas Ernest Rogers (1953-2021) was born on May 26, 1953 in Houston, Texas to Amos Whitten Rogers, Jr. and Mary Bohoney. Tom was raised in Los Angeles County and graduated from Sierra High School in Whittier, California in 1971. He earned an A.A. degree with a certificate in dental technology from Orange Coast College and also studied architectural drawing and the building trades. He became a
gifted licensed general contractor.

On March 9, 1985, he married Karen Soderman in Southern California and together they raised 4 children. In 1996, they relocated to Northern California where Tom pursued his career as a general contractor, remodeling commercial and residential properties.

At a young age, Tom took up guitar and joined his 1st band while in high school. As a talented guitarist, bass guitarist, drummer, vocalist and song writer, he and his band performed at small local venues.

Tom loved life. He was spontaneous, fearless and enjoyed adventure. His interests included fishing, surfing, downhill skiing, sailing, gardening, barbecuing, carpentry/woodworking, and prospecting for gold. Tom loved to spend time tinkering in his garage and had a passion for animals. He will be remembered for his sense of humor as well as his energetic and adventuresome spirit.

Sadly, in 2008, Tom was diagnosed with Parkinson’s Disease and in June 2015 was placed at Western Slope Rehabilitation Center in Placerville, California. He faced his disease with courage and grace. Tom died peacefully on June 8, 2021 at the age of 68 with his family beside him.

A celebration of life will be scheduled in July on a date yet to be determined.

To send sympathy gifts to the family or plant a tree in memory of THOMAS ERNEST ROGERS, please visit our tribute store.